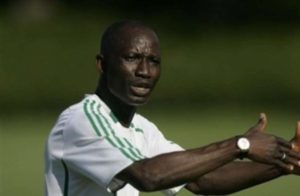 Nigeria's national male U-20 team, the Flying Eagles are currently sweating it out at the FIFA Goal Project training pitch in Abuja as they intensify preparations for this month's WAFU B AFCON U-20 qualifiers in Lome, Togo.

The zonal competition which serves as qualifiers for the 2021 U-20 Africa Cup of Nations in Mauritania will kick off on November 14 and end on December 2.

Seven time winners of the U20 AFCON, the Flying Eagles are in group B with familiar foes, the Black Satellites of Ghana and the petit Elephants of Cote d'Ivoire.

The Flying Eagles whose last victory in the championship was in Senegal in 2015 under the tutelage of Coach Manu Garba will kick-off their campaign on November 19 against the Junior Elephants of Cote d'Ivoire at Stade Municipal in Lome, Togo

They will then round up their group fixtures with a potentially explosive clash against perennial rivals Ghana on November 22.

The top two teams (finalists) in each qualification zone will qualify for the main tournament, which now involves twelve teams.

After much procrastination, the Nigeria Football Federation in September announced the appointment of Ladan Bosso as Head Coach of the Flying Eagles, 11 years after he was dismissed from the position.

His immediate assignment is, therefore, to qualify the team for the 2021 Africa U-20 Championship and the 2021 FIFA World Cup in Indonesia.

Without any doubt, one of the most competent and most controversial coaches in Nigerian football, the Niger State born tactician is in familiar terrain.

It will be recalled that Bosso became quite popular after he made allegations of racism against English referee Howard Webb after the Flying Eagles lost to Chile at the quarter-final stage of the 2007 FIFA U-20 World Cup in Canada.

Although fined by the world football ruling body, FIFA, the outspoken coach continued in the job, but was dismissed two years after his team only managed to finish third at the U-20 Africa Cup of Nations in Rwanda.

Most Nigerians expressed disappointment with the performance of the Flying Eagles, whose performance was judged to have fallen below standard.

Understandably, Bosso was harshly criticised because in 2005, Samson Siasia had led the team to victory in the AFCON in Benin Republic.

He would later guide the same team to reach the finals of the World Championship in Holland, where the Flying Eagles narrowly lost to Lionel Messi inspired Argentina in the thrilling finals.

Undaunted by the major setback in his career, Bosso moved on to coach a number of clubs in the Nigerian Professional Football League.

Even if his assistants and players do not have so much to prove in Lome, there is so much at stake for the widely travelled gaffer because he is expected to redeem his image after the failures in Canada 2007 and Rwanda in 2009.

It is an open secret that what cost him his job the last time was the failure of his team to qualify for the 2009 FIFA U-20 World Cup.

Secondly, as the president of the Nigerian Football Coaches Association, he has to lead by example. If he fails to justify the confidence reposed in him by the Nigeria Football Federation, it will surely be a dent on the image of the association he is leading.

Thirdly, Bosso is a long standing member of the NFF technical committee and technical study group. It is, therefore, expected that he would bring his wealth of knowledge and experience to bear on his present assignment.

However, his job has been made more complicated by the outbreak of the deadly COVID-19 which brought almost all human activities to a halt for several months.

In Nigeria, all on-field football activities were indefinitely suspended in March due to escalation in cases of the coronavirus.

It was only recently that the Presidential Task Force of COVID-19 lifted restrictions on all contact sports, especially football.

Despite the lifting of the ban on football, the game is yet to fully resume in the country as the football leagues are still planning to re-start.

Unfortunately, the majority of the players who are currently in the Flying Eagles camp in Abuja are from the Nigerian league which has been in comatose.

Invariably, a lot of work will have to go into preparing the players from the qualifiers in Lome. But time is fast running out on Bosso and his assistants.

It is said he will inevitably go back to some of the Nigerian upcoming players who are playing in foreign clubs.

A former Nasarawa United star, Sunusi Ibrahim, who is currently playing in England with championship side, Watford will be one of such players.

In addition, if he chooses not to throw away the baby with the bath water, Bosso may include some of the outstanding players in the last Golden Eaglets squad in his team for the qualifiers.

Although the Golden Eaglets of 2019 fell terribly short of expectation, it produced some talented youngsters like Captain Samson Tijani who recently debuted for the Super Eagles in the international friendly with Algeria.

Others who distinguished themselves in the team are Ibrahim Said, Ibraheem Jabaar, Olakunle Segun, Olu Adeniyi, Usman Ibrahim and Wisdom Ubani.

Two weeks may be too short to prepare adequately, but going by the array of talented youths in the country, the technical crew of the Flying Eagles led by the highly experienced Bosso is expected to deliver the 2021 AFCON U-20 ticket.