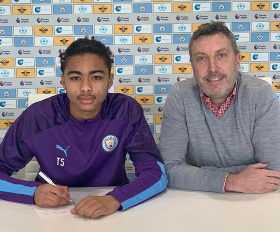 Manchester City have snapped up Nigerian defender Camron Gbadebo from Premier League rivals Leicester City following a successful trial, according to various reports in the English press including Foxes Hub.

The 17-year-old is bidding farewell to the Foxes after nine appearances for their U18 team in the U18 Premier League.

Gbadebo previously turned out for the youth teams of Watford and Crystal Palace before he was acquired by Leicester City in 2018.

Writing on Instagram, Gbadebo said : "I'm so happy to announce that I’ve signed for @mancity.

"Thank you to every one that has supported me on my journey so far. This is only just the beginning!"

He is a product of the Kinetic Foundation Academy in South London that produced Nigeria internationals Joe Aribo and Josh Maja.