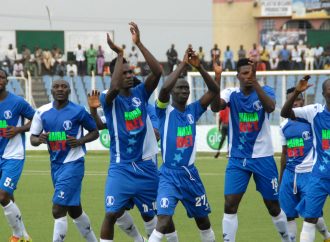 Enyimba missed the chance to close the gap on league leaders Plateau United as the Aba side lost 1-0 to relegation threatened Shooting Stars in Ibadan in the Nigeria Professional Football League on Sunday,

The only goal of the game was scored by Abayomi Adebayo in the eighth minute.

Shooting Stars are now in the 16th position on 40 points in the league table, while Enyimba remain fourth on 47 points.

In Makurdi, Lobi Stars were forced to a 0-0 draw by leaders Plateau United.

Despite the draw, Plateau United remain top on 55 points.

At the Godswill Akpabio Stadium in Uyo, title-chasing Akwa United came from behind to beat Nasarawa United 2-1.

Ubong Friday equalised for Akwa United with four minutes left in the first half before Christian Pyagbara scored the winner in the 48th minute.

Akwa United, who have a game in hand, jump from third position to second on 50 points on the log, five adrift of Plateau United.

Another team in the race for the title, El-Kanemi Warriors, lost 1-0 to Sunshine Stars in Ijebu Ode.

Sikiru Alimi was the hero for Sunshine Stars as his 34th minute goal sealed the win for his club as they continue to move away from relegation trouble with their third win in four games.

In Ilorin, champions Rangers’ poor run in the league continued as they lost 2-0 to ABS and got dragged back into the relegation fight. With Sunshine, 3SC and Rivers United winning, the Flying Antelopes are now back in the relegation zone. Sunshine Stars Plan Squad Overhaul

A goal in each half from Abubakar Chindo and Wasiu Alalade in the 15th and 51st minutes respectively secured the three point At the Sani Abacha Stadium in Kano, Remo Stars’ relegation woes worsened as they lost 2-0 to Kano Pillars.

In the 39th minute, Sikiru Kamal scored what was the winner to give Pillars the win.

In other NPFL matchday 31 games on Sunday, Abia Warriors held Niger Tornadoes to a 0-0 draw in Minna, FC IfeanyiUbah were forced to a 2-2 home draw by Gombe United while Rivers United, who have two games in hand, beat Wikki Tourists 3-1 in Port Harcourt.

Meanwhile, the game between MFM FC and Katsina United at Agege was called as a heavy downpour left the pitch waterlogged.

The game will now be played on Monday by 8am.