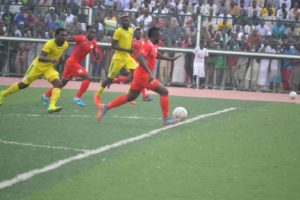 Stanley Dimgba missed the chance to put Enyimba ahead from the spot in the 26th minute.

Sadiq Abubakar put the visitors ahead on the half hour mark following a brilliant solo effort.

Chukwuemeka Obioma, on loan from Enyimba added a second for Heartland late in the first half.

Enyimba fought hard to get back into the game after the break but Heartland goalkeeper Ikechukwu Ezenwa produced a number of impressive saves to deny the home team.

The Flying Antelopes raced into a two-goal lead early in the game courtesy of fine strikes from Kelvin Itoya and Kenechukwu Agu.

Charles Atsemene reduced the deficit for the hosts four minutes before the break.

Rangers finished the game with 10 men after Agu was sent off for a second booking after an elbow offence on Abu Azeez.

In Akure, Plateau United went down to a 2-1 defeat against Sunshine Stars.

Timileyin Ogunniyi fired Sunshine Stars ahead in the 11th minute after he was teed up by Anthony Omaka.

Uche Onwuasonya reduced the deficit three minutes before the half hour mark after he was set up Michael Ibeh.

Rivers United moved to second position in the table following a 2-1 win against leaders Lobi Stars at the Aper Aku Stadium in Makurdi.

Alao Danbani scored both goals for the Kwara United.

The Norhern derby between Katsina United and Kano Pillars ended in a 1-1 draw at the Muhammadu Dikko Stadium.

Seun Adelani Yusuf put Pillars ahead in the 34th minute, while Tasiu Lawal equalised for the hosts 10 minutes later.

MFM came back from a goal down to beat Jigawa Golden Stars 2-1 at the Agege Stadium.

Joshua Akpuje conceded an own goal on the hour mark but he later scored twice in the 41st and 69th minutes respectively to hand the Olukoya Boys all three points in the game.

The oriental derby between Abia Warriors and FC Ifeanyiubah in Umuahia ended 2-1 in favour of the home team.

Lukman Hello and Yakub Hammed were on target for Abia Warriors in the game, while Jimoh Gbadamosi scored the visitors only goal from the spot.