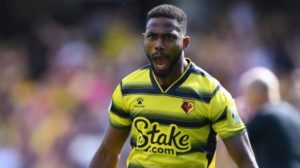 Premier League new boys Nottingham Forest have firmed up their interest in Emmanuel Dennis by making a bid to sign the Watford striker this summer.

According to The Athletic UK (subscription required), the total fee inclusive of add-ons is in the region of £20million (approximately N10.2 billion in Nigerian currency) but the exact structure of the proposed transfer is unclear at the moment.

West Ham were rumoured to be contenders for the signature of the Nigeria international but have reportedly backed out of a deal, paving the way for Nottingham Forest to go all out to sign the 24-year-old.

If the deal materializes, Dennis would partner his international teammate Taiwo Awoniyi in Nottingham Forest's attack.

The 2013 U17 World Cup winner became the Reds most expensive acquisition in history when he joined them in June from Union Berlin in exchange for 20 million euros.

Watford are open to the idea of selling Dennis so that they can slash their wage bill following demotion to the Championship.