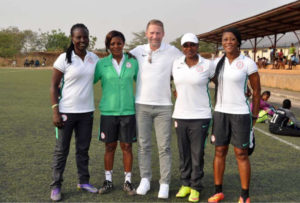 Nigeria Football Federation board member Ibrahim Gusau has confirmed the resignation of Thomas Dennerby as Head Coach of the Super Falcons.

Gusau made the revelation immediately after the Falcons failed to progress in the Tokyo 2020 Olympics qualifying Tournament.

It would be recalled that Dennerby, who led the team to victory in last year’s African Women’s Cup of Nations in Ghana and round of 16 finish at the FIFA Women’s World Cup in France, left his position acrimoniously following disagreements with NFF Chieftains over team selection.

Reports also claimed that, the Federation instructed the embattled Swede to leave some influential players out of the team, because of their well publicized protest over unpaid allowances and bonuses during the 2019 FIFA Women’s World Cup; a move that left Dennerby’s position with team untenable.

Gusau confirmed the NFF has received Dennerby’ resignation letter, and admitted that his departure weakened the team.

“I think we were unlucky not to qualify, because since 2008 , which is almost eleven years now and you know we have a little issues about the coach,” he stated.

“The coach just went off along the line and sent the letter of his resignation, and you know it is going to be a very difficult task for whosoever is taking over to continue from there.”