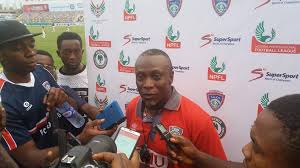 Eduwo and Preko posted superior performances with their clubs in the Nigeria Professional Football League (NPFL) in the month under review to fend off other contenders in the running for both categories of awards.

It was a strong field of shortlists for the player's award as Eduwo had to square up with last season's top scorer Godwin Obaje of FC Ifeanyiubah, Enugu Rangers winger Osas Okoro and Plateau United left-back Daniel Itodo.

At the end, the list was trimmed to just two players, Eduwo and Obaje. The FC Ifeanyiubah man and his Lobi counterpart were tied on three goals apiece in May.

Eduwo scored in Lobi's 1-0 win at Sunshine Stars and got a double against 3SC while Obaje netted in FC Ifeanyiubah's 3-0 success at Shooting Stars Sports Club (3SC) and then scored the two goals that saw off four-time champions Kano Pillars in Nnewi.

However, Eduwo topped Obaje with an assist in their three-nil victory over 3SC at the Aper Aku Stadium in Makurdi on 28 May when he provided the assist for Sunday Akleche's goal to wrap up a fine day in the office for Lobi.

Abdu Maikaba of Akwa United, Solomon Ogbeide of Lobi Stars and Chukwuma Agbo of Rangers were all in line for the manager's award alongside Preko.

Preko, Maikaba and Ogbeide led their teams to unbeaten streaks in May. FC Ifeanyiubah under Preko in May were ruthless - defeating 3SC in Ibadan 3-0 and cruising past Kano Pillars 2-0 in Nnewi - to finish the month as the most impressive side with no goal conceded and best superior goal difference.

Lobi's Ogbeide was right on Preko's tail but lost out by virtue of his club's inferior goal difference (of +4) compared to that of FC Ifeanyiubah (+5) despite winning their two matches as well in Akure against Sunshine Stars and against MFM FC in Makurdi.

The next edition of LBA will be for manager and player for the month of June.