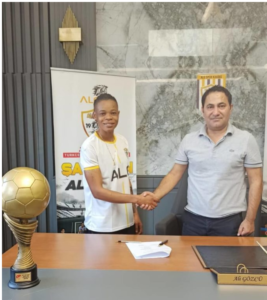 ALG Spor have signed Glory Ogbonna on a free transfer after undergoing a medical with the club.

Ogbonna was presented by the club to the fans and will wear the No 5 jersey.

She made 15 appearances, got 3 assists, and made the player of the week once during her short stint with Santa Teresa CD.

“I feel good to join the champions of Turkish women league, and I will also give out my best to them in order for them to continue being the champions that they are”.

ALG Spor is a club founded in 1998 and are defending champions of Turkish Women’s Football Super.

Thier title success has earned them a place in the 2022–23 UEFA Women’s Champions League.