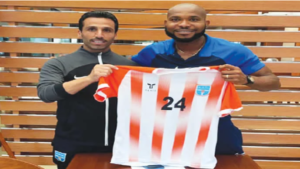 Omoh began his career at local side Gateway FC in 2008, before he moved to Dalkurd in Sweden in 2011.

The 30-year-old would go on to play for other Swedish sides Ostersunds, Orebro and Mjallby on loan, before switching to Romania’s Politehnica Iasi in 2020.

According to Omoh’s manager Kennedy Adeborioye, the creative midfielder had several offers from Asia and Europe during the off-season, but opted to join Kazma

“He had several offers from Saudi Arabia, UAE, Qatar, Oman and Vietnam, and even from Romanian clubs like Cluj and FC Botosani but he turned them down,” Adeborioye, popularly known as Boboye,

“He choose Kazma because of their terms of contract and the club’s manager has already spoken to him about his plans for him. That’s why he choose Kuwait ahead of the other offers.”