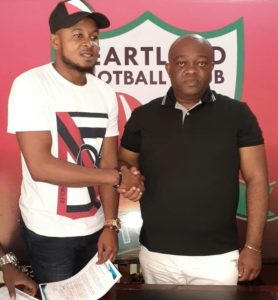 Ezenwa linked up with the Naze Millionaires on a free transfer following the expiration of his one-year contract with another NPFL side, Katsina United.

It will be the Super Eagles’ goalkeeper’s second stint with the five-time NPFL champions after previously featuring for them eight years ago. 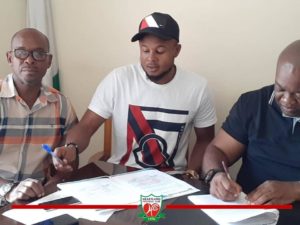 Ezenwa is the Owerri club’s first signing ahead of the 2019/2020 NPFL season after hiring former MFM FC coach Fidelis Ilechukwu.

“I am here to give a good account of myself in the field of play. I am hoping for the best while in Owerri, and I am full of positive anticipation that we would grab a ticket and head to the continent again,” Ezenwa told Heartland’s official website after penning the contract.

Heartland’s General Manager, Chief Ifeanyi Chukwudi also stated that the club has made a statement of intent with the acquisition of the experienced goalkeeper.

“This is a statement of intent, that Heartland is in for serious business and not business as usual,” Chukwudi declared.