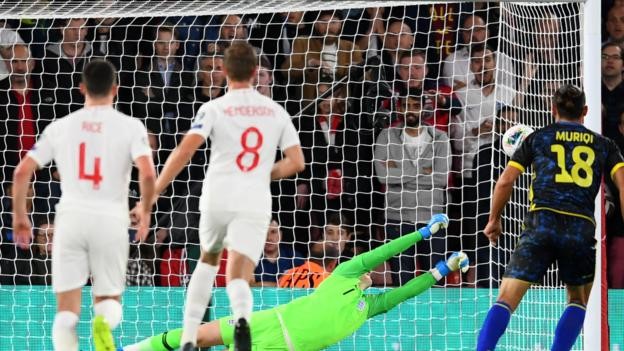 Gareth Southgate's team can secure a place at next year's finals if they beat the Czech Republic on Friday.

England have won all four qualifiers to date but conceded three goals to Kosovo and in June lost the Nations League semi-final 3-1 to the Netherlands.

"We have to concede less goals," Alexander-Arnold said. "We know where to improve and where to work on."

An entertaining encounter at St Mary's last month saw an error by Michael Keane help the Kosovans, 120th in the Fifa rankings, take the lead after just 34 seconds.

"If we want to be regarded as one of the best teams in Europe and go far in the Euros, and try and win the competition, our goals conceded must be fewer," said the Liverpool full-back.

"Kosovo, really, were an underrated side and we had massive respect for them before the game and we knew they had threats.

"Luckily for us we were able to outscore them but we were not happy with the goals we conceded and we need to work on it."

The 21-year-old made his international debut last year and was part of the squad that reached the World Cup semi-finals, but made only one appearance during that competition in the third-place play-off.

An ever-present for Liverpool this season, who have won their first eight Premier League matches conceding only six goals, he started against the Kosovans ahead of Kieran Trippier.

The Merseyside-born defender revealed the England players were planning a meeting before Friday's qualifier in Prague and the trip to Sofia to face Bulgaria three days later.

"As players we analyse our games, we know during the game what's going right and what's not," he said.

"No, we've not had the meeting yet but we will over the next few days to make sure it doesn't happen again. It's important to look back on our game and see where we need to improve.

"The obvious one is that the amount of goals we conceded was not good. It's about making sure we get that right this time."