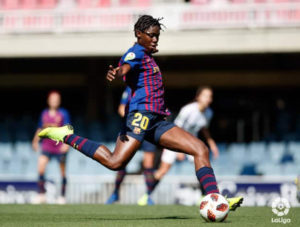 The Super Falcons striker began the season in stunning fashion as her Barcelona side romped to a commanding 9-1 victory over Tacon in the opening game of the season’s Spanish Women League.

Asisat Oshoala, days after scoring the winner to lead Nigeria’s national women football team past Algeria in an Olympics qualifier, starred as Barcelona thrashed Tacon in front of a record 5,413 spectators at the Johan Cruyff Stadium on Saturday

The former Arsenal attacker started the game but it was a hat-trick from Jenni Hermoso, a double from Aitana and goals from Alexia, Mariona, Graham and Lucía, the latter in her own goal that ensured a first victory of the 19/20 season for Lluis Cortés side. 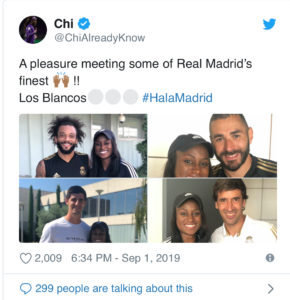 Also in the starting lineup for the away side was Anglo-Nigerian Ubogagu Chioma who only joined Real Madrid Women last week from United States’ Orlando Pride. But the forward could do nothing to prevent a Tacon bashing as Barça Women emphatically won their first ever encounter at their new home, the Johan Cruyff Stadium

Newly promoted to Spain’s top flight, Tacon are to play their home games at Real Madrid’s training ground this season and complete the full transition into Los Blancos’ first ever women’s team at the end of the campaign.

It didn’t take long for the difference in class to manifest has Lluis Cortés’s team dominated from the start and opened the scoring through Alexia in the 8th minute. 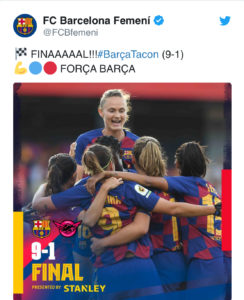 Lucía Suárez added a third and later assisted Mariona for the teams fourth all before the break.

Tacon pulled one back through Jessica Martínez shortly after the break but the hosts could not be kept out for long as Aitana and Graham scored in quick succession before Jennifer Hermoso, who replaced Oshoala in the 54th minute, hit an 18 minute hat-trick to finish a dream start.