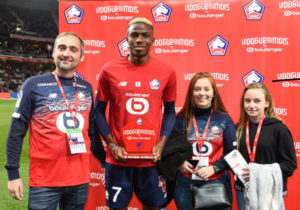 Nigeria international, Victor Osimhen has won Lille’s player for the month of September following his outstanding form for the Club

Osimhen arrived France on back of a successful season with Belgian side Charleroi, where he scored over 20 goal to be named the Club’s player of the year.

He has hit the ground running immediately for Lille , scoring seven league goals in nine outing and one in two UEFA Champions league game.

The award was handed over to the Nigerian after Sunday’s home draw against Nimes at the Stade Pierre Mauroy.

Osimhen rescued his side’s from embarrassing home defeat after scoring the equaliser in the closing stages of the match on Sunday.

He is expected to lead the line for the Super Eagles when they take on Brazil in an international friendly slated for Singapore later this month.