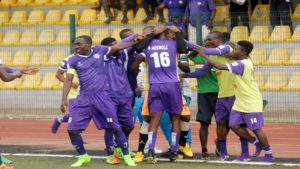 Anthony Omaka’s seventh-minute strike was all Kabiru Dogo’s men needed to tame the People’s Elephants at the Akure Township Stadium.

The defeat was Enyimba’s first this season and they will be hoping to bounce back when they host strugglers Adamawa United on Sunday. 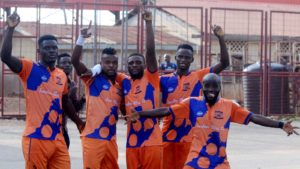 At the Agege Stadium, MFM would have Adeniji Adewole to thank as the forward scored at the death to ensure their tie with Warri Wolves ended 1-1.

The Olukoya Boys went with high hopes having recorded away victories at Enugu Rangers and Heartland.

However, Tony Bolus’ men were shocked as the visitors took the initiative after 59 minutes as Moses Omodumuka’s free-kick beat goalkeeper Folarin Abayomi.

When it looked like Wolves would be cruising home to their first away win, Adewole levelled matters to send the home fans into a frenzy.

Elsewhere, Plateau United held Nasarawa United to a 1-1 draw in Lafia to hold firm at the NPFL summit with 10 points.

The hosts took a first-half lead courtesy of Anas Yusuf’s 43rd-minute strike before the 2017 champions ensured honours were evenly shared after Mustapha Ibrahim’s effort seven minutes into the second half.

Poor finishing was Akwa United’s major undoing as they played out a 0-0 draw with Katsina United at the Godswill Akpabio Stadium.

Despite boasting of superior ball possession, the Promise Keepers failed to convert their chances as they remain without a win.

Yusuf Muhammad was Jigawa Golden Star’s hero as his seventh-minute strike helped the newcomers to a 1-0 victory over Kano Pillars. 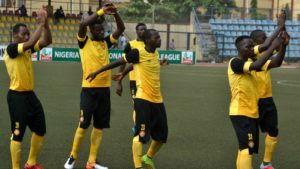 In Gombe, Delta Force could not consolidate on their 4-1 thumping of Jigawa Stars as they were silenced 3-1 by Wikki Tourists.

Lobi Stars were reduced to 10 men following Adeleye Aniyikaye’s dismissal but it did not rob them of some shine as they were 3-0 winners over Heartland.